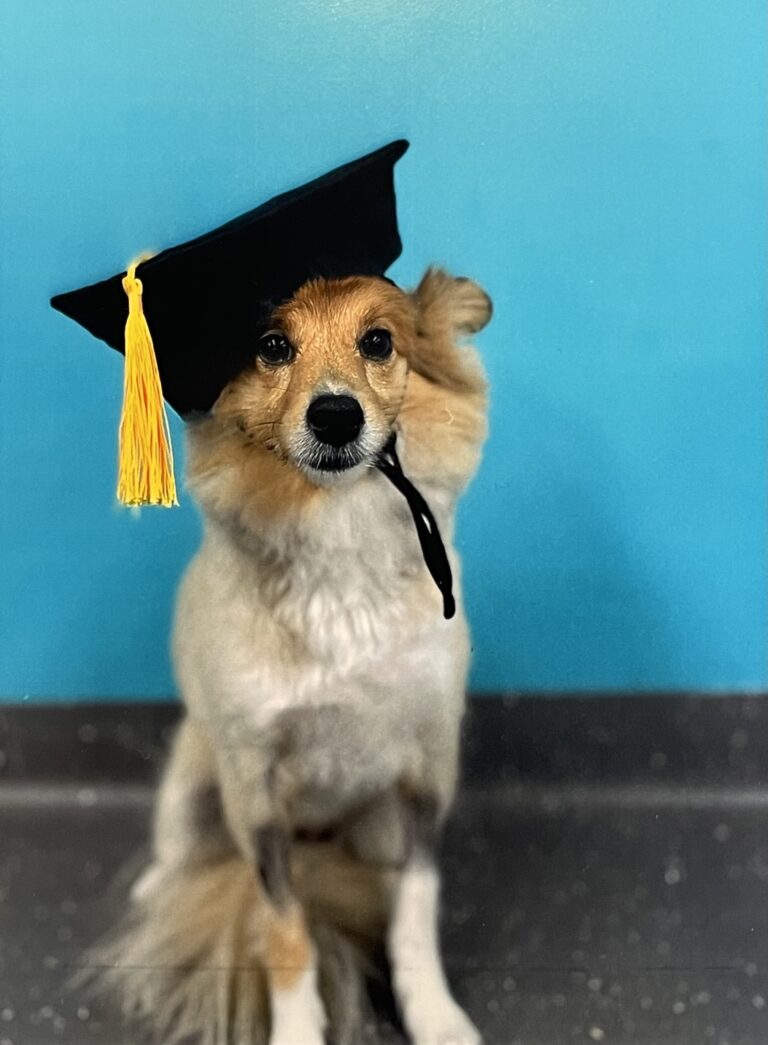 It was in the spring of 2021 I noticed something wasn’t right with my little Sheltie girl Marilyn, 4 years at the time. Out of our fur baby family consisting of five Shetland Sheepdogs, Marilyn and her sister Biscuit had always been the active and fit ones, walking around 5-8kms every day and always hungry for more.

One day I noticed that Marilyn wasn’t keeping up with her sister, she seemed to struggle with the walk and was slowing down. I checked her paws in case she’d stepped on something, felt her legs and back, but nothing indicated what was wrong. The next day I went in to our local vet and informed them of my concerns. They did a thorough check with blood work and also an x-ray.  Her bloods were good, and everything looked normal on her scans. I was told I had nothing to worry about and she probably had just been over exercised.

I knew this wasn’t correct, since Shetland Sheepdogs are originally herding dogs and built for an active lifestyle so I suspected something worse but thought ok…I’ll give it some more time and limit her exercise. About three – four weeks went by, and she was getting worse. I had now started to notice her left back leg lagging ever so slightly. Even though our walks had gone from 5kms a day to 2kms, it started to become a habit to carry her half of each walk because she was simply too weak. One day when I lifted her up in my arms, I noticed her left back paw covered in blood. I looked closely and could see that her claws were filed down to the quick and that was where all the blood had come from. I carried her home and rushed to the vet. The vet agreed her back leg was slightly delayed and suggested an ultrasound on her stomach and lower spine/hips. It came back clear. Again, I was told she just needed more rest and I was most likely overthinking the situation. I should just give it time.

As I was driving home, with my little girl next to me I said to myself, no this is not it, I have to get to the bottom of this. I got home and did so much research and started calling different kinds of specialists to try to figure out what was happening with her. I was pointed in the direction of a spinal surgeon at VSOS in Miranda, NSW. We were lucky and got in after only a few days. Dr. Laurencie checked her spine, her range of movements, Marilyn’s delayed reaction in her left back leg and told us there was a risk it might be something obstructing her spinal cord, causing the nerves controlling her hind legs not to function properly. She was booked in for an MRI the next day. The scans came back. Marilyn had a tumour, taking up 50% of the diameter of her spinal cord. To get such heartbreaking news is a dog lover’s worst nightmare. I was filled with so many different kinds of emotions; sadness and shock were a couple…impatience to fix it was another.

Biopsy was next up, to understand what type of tumour we were dealing with. Results came back, showing it was a spinal meningioma. At first the specialist thought that surgically removing this tumour, which was within the spinal cord wouldn’t be possible, but to be 100% sure we did another close up MRI of this area and could see that the majority of the tumour was in the outer layer of the spinal cord, within the meninges and therefore surgery was risky, but still possible.

On the 8th December 2021 she had her surgery. Dr. Laurencie did a fantastic job, managing to remove the entire tumour. She advised us that surgical removal of a tumour isn’t always enough and she wanted us to consider chemotherapy and radiation once little Marilyn had recovered from her surgery. She pointed us in the direction of SASH and Dr. Elias Gumpel. We were lucky again, and managed to get an initial consultation with Elias shortly after her surgery. Dr. Elias was very empathetic and incredibly knowledgeable and showed so much care for Marilyn when he explained the benefits of chemo and what protocol Marilyn would be on. When he told us how he managed to cure his own Boxer from cancer several times, and got 11 amazing years together I knew he was the right person to trust with my little girl.

Because Marilyn was still recovering from the surgery we said we would give her one month of hydrotherapy and physiotherapy at SASH so she would get every chance possible of regaining normal movement of her back legs again. I took her in twice a week and she was improving so quickly. January came around and the radiation started. She was on a definite protocol meaning it was 5 days a week for four weeks. I’m not going to lie, it was tough on her, but I know as well what could have happened if we didn’t go ahead with the chemo. We were giving her every single chance to enjoy a happy and healthy life as possible by doing this. I dedicated my whole days to her so after every session she sat in my arms for an hour before driving home. She was shaking a lot as she came off her meds from the anaesthesia but I do believe it gave her some strength knowing mummy was there with her every single step of the way.

The first week and the last week was toughest on her, whereas week two and three it was hard to tell she was going through chemo. Session 20 out of 20 came around and we finally reached the finishing line. On her graduation day, Dr. Elias and his wonderful team gave her a diploma and picture of her with a graduation cap. Oh how we celebrated that week! Almost one year on and Marilyn is nothing but a true miracle! She’s now back to walking her long walks with her sister and brother, loves to play boll in the park and runs on the beach. She’s such a survivor. After doing everything we possibly could do with surgery and chemo, I also read a book about dog cancer and holistic ways to keep her this healthy and for the cancer to never come back again. So together with her six monthly check up with SASH I also incorporate some supplements in her diet that I truly believe have a positive impact on her health. She’s a little fighter, survivor and a true example of the belief that cancer is not a death sentence and with the right people, dedication and love you can conquer even the worst of the worst and get a second chance at life ❤️

Share your pet’s cancer story for a chance to win!