One friend's experience with Emergency

Vomiting puppies are very common in our Emergency and Critical Care service, although cases can range from quite benign to life threatening.

Some puppies may have just eaten something that didn’t agree with them, while others might have life threatening bowel obstructions. When one very sick Labrador puppy visited our VetICU team there was concern it was the latter, and that something quite serious was going on.

The puppy was very quiet and dehydrated on examination, but when the vet felt his abdomen there was nothing abnormal about it. The two things don’t fit so we were worried there may be something we couldn’t feel.

Part of the clue was his mood. Puppies that vomit but remain bright and happy should be checked by a veterinarian; however we are far more concerned when a puppy is sick and mopey. Sad vomiting puppies are an emergency and need to be seen immediately.

X-rays were taken of this puppy’s abdomen and the results suggested an obstruction – an immediate indication for surgery. The next step was to verify the bowel had not already burst by doing an emergency ultrasound. It showed that something called an ‘intussusception’ had happened, where one portion of the bowel slides into the next, like closing a telescope. This is a life threatening obstruction and occurs mostly in puppies and kittens but can sometimes affect older animals. If left too long the blood supply to the bowel does not work properly and the bowel section can die and rupture, making it even more deadly.

The offending piece of bowel was able to be gently moved out so it was not ‘telescoping’ itself any more. Thankfully our team had acted quickly enough that the bowel was all viable and none needed to be removed.

By morning we now had a cute Labrador puppy no longer vomiting and just two days later he was back home with his delighted new family. 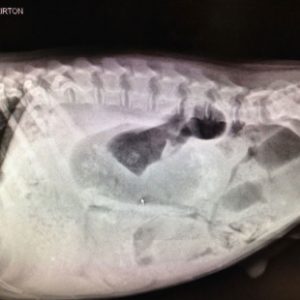 “This patient was a great example of the resources at SASH. The patient presented to Emergency where the severity of the problem was observed, was then examined by the Medicine team who diagnosed that the Surgical team had to operate right away. It was a great result.”