One friend's experience with Neurology and Neurosurgery

Bowie – a 10year old male domestic short hair, was referred to SASH in March with Diabetes that could not be controlled, because Bowie did not have a simple version of diabetes – he actually had acromegaly, a condition caused by a tumour of the pituitary gland at the base of his brain, that was secreting excessive amounts of growth hormone.

Previously there has been no effective treatment options for this condition available in Australia as ideal treatment involves surgically removing the pituitary gland tumour (hypophysectomy). Our neurosurgeon Dr. Patrick Kenny has performed this procedure on over fifty cats and dogs in his time overseas, and has now brought this technique to SASH. Bowie’s tumour was small (about the size of a pea) and right in the centre of his skull.

This intensive management was overseen by our Internal Medicine Specialist Dr. Amy Lam and our intensive care nursing team. Bowie was up and eating just two hours after he woke up from surgery, and went home just after one week.

Bowie’s surgery has been a great success – the first of its kind in Australia. Acromegaly is likely an under diagnosed condition in Australian cats, and is, as Bowie has shown, potentially curable.

Our thanks go to Bowie for being such a great patient, and to Bowie’s wonderful and dedicated owners! 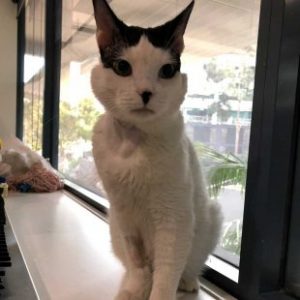 “Our thanks go to Bowie for being such a great patient, and to Bowie’s wonderful and dedicated owners!”