“Dialysis”, “haemodialysis”, and the more accurately termed “renal replacement therapy”, is where we use machinery to act as a patient’s kidneys while we are buying time for their own kidneys to heal. Blood is pumped outside the body, “cleansed” by a machine, and returned back to the patient. This way, we can get rid of some of the life threatening effects of kidney failure AND make the patient feel a lot better.

What patients are a good candidate for haemodialysis?

There are a number of reasons why a patient may need haemodialysis. Some of these include:

Normally, haemodialysis is reserved for patients with kidney disease so severe, that euthanasia is becoming a likely outcome.

What happens after a pet undergoes haemodialysis?

Generally, we would expect:

Of the pets that undergo haemodialysis, approximately 50% will recover, and 50% will not (this also varies based on whether there is a treatable cause). Although these odds seem low, it is important to remember that haemodialysis is generally only an option for pets that are facing likely euthanasia.

From the 50% that will recover:

There is no good way to tell which animals will survive or which will regain normal kidney function. The only way to tell is to start treatment and see whether they respond.

Dialysis or haemodialysis is a minimally invasive procedure that makes patients feel better and stay alive while their kidneys are healing. Kidney healing takes weeks to months, but the effects of kidney failure can kill a patient very quickly. Dialysis bridges this gap and buys us time to give their kidneys a chance. Dialysis itself does not FIX the kidneys, but simply acts as artificial kidneys. We cannot always predict how much permanent damage has been done to the kidneys or how much previous kidney disease your pet had (unless blood tests documenting normal kidney function was performed in the past year). 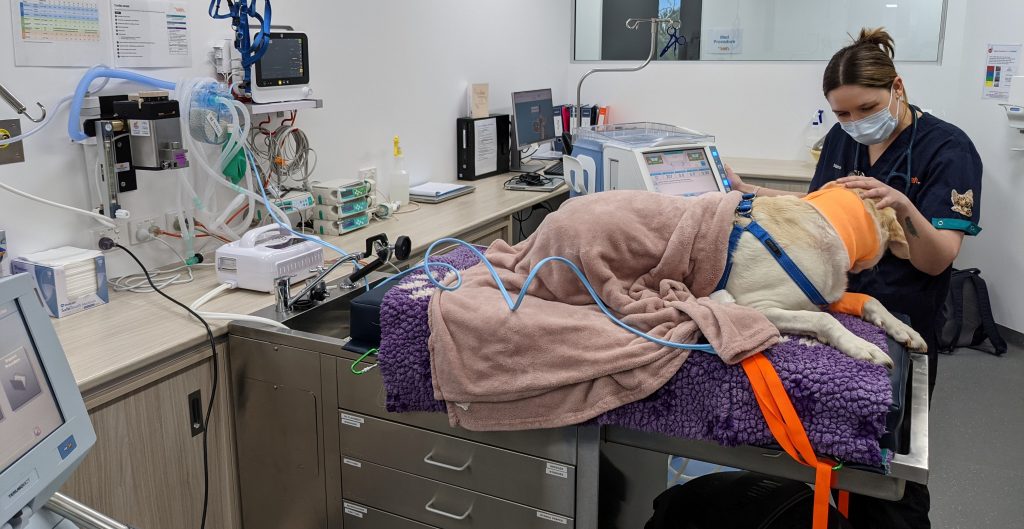 Can a pet with chronic kidney disease receive haemodialysis?

As a general rule, we do not perform dialysis for chronic kidney disease patients. This is because for most patients, they will require dialysis (10 hour days in hospital) approximately 3 times a week and are not necessarily feeling well enough to be eating. This level of quality of life is appropriate if it is temporary (for a few weeks or months) with a chance to go back to normal life – such as in the case of acute kidney injury. But this is not good quality of life for a pet if this is going to be a permanent arrangement.

Additionally, for many patients, the process of haemodialysis may require large volumes of donor blood, each time (or every few times) it is performed. Receiving donor blood has risks and separate to that, donor blood is a very scarce and previous resource in veterinary medicine. We rely on the generosity from members of the general public to allow their pets to donate blood. There can be rare cases where haemodialysis may be appropriate in chronic kidney disease (e.g. a large breed dog who does not require donor blood to prime the machine tubing, who genuinely has good quality of life while on dialysis). We do not perform haemodialysis for chronic kidney disease in cats due to their small size.