One friend's experience with Emergency

In emergency cases, pets may need immediate surgery and are taken to SASH’s Vet ICU – our critical care unit – where our team race against time to help.

For heavily pregnant Karma, the lives of her puppies were at risk.

When Karma first arrived as SASH VetICU, it was around midnight and she was in labour. She had been straining to pass a puppy for several hours, which immediately caused concern. On top of that, while one healthy puppy had been born earlier that evening, a stillborn puppy had then passed and Karma had been straining since.

While in labour, it’s important that dogs give birth to a puppy every hour if they are actively straining. If they stop straining between puppies, it should not be longer than three hours. Failing to pass a puppy after one hour is usually a symptom of dystocia (difficulty whelping), which is usually due to inertia (the uterus not moving), a low blood calcium level, or a narrow pelvis. Occasionally it is due to very large or malpresented puppies.

It usually requires some intervention. In Karma’s case, she was quickly taken to X-ray, which showed several puppies were still waiting to be delivered. The heartbeats of the puppies could be detected with a stethoscope.

Karma went straight to surgery at SASH and 5 pups were delivered via Caesarean. One was malformed, which had caused a blockage to the birth canal and failure to pass the puppies, and one had unfortunately already died. But three healthy puppies were delivered that day and Karma was a natural at mothering.

Thanks to quick thinking by Karma’s owners and the vets at SASH, those three puppies were saved, and just the next day, Karma and her new brood were able to go home and get some much needed rest. 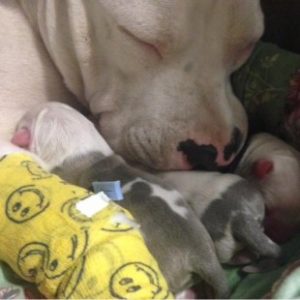 “It is very important that whelping bitches pass a puppy every hour when they are actively straining, or only stop straining for a maximum of three hours between puppies. Failing to pass a puppy after one hour is usually dystocia – or difficulty whelping which usually requires some intervention.” 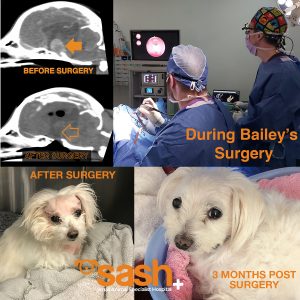