Tunbi is originally from Canberra and has always loved animals. Her passion to be a vet made her travel to Western Australia where she studied Veterinary Science at Murdoch University and graduated in 2010. After graduation, she gained a job as a small animal vet in Horsham, Victoria. However, in 2012 the opportunity to work in a small animal practice in Canberra arose and she moved back home and worked at that clinic for 3 years.

During Tunbi’s career as a veterinarian, she has always endeavoured to improve her knowledge base and skill set through attending numerous veterinarian conferences, seminars workshops and participating in online courses and voluntary externships. Her motivation to always expand her veterinary knowledge and be a compassionate vet is simple: She would want that for her own pets.

In 2012 she was awarded the post-nominal, Charted Member of the Australian Veterinary Association; for her commitment to continuing education. In 2014 she gained membership through examination, to the Australian and New Zealand College of Veterinary Scientists, in Small Animal Medicine.

In 2015, Tunbi began a small animal medicine residency training program at Melbourne Veterinary specialist centre (MVSC) and completed this in December 2017. She then worked as a Medicine registrar at the Animal Referral Hospital in Canberra, which increased her ability to work independently as a medicine clinician.

Tunbi is interested in all aspects of internal medicine but has an affinity for infectious diseases, haematology and immunology. Her training at MVSC, allowed her to gain much experience and confidence in abdominal ultrasound and basic echocardiography and thus ultrasonography is also another special interest of hers.

Tunbi Loves her puggle, Kai and both of them love food! She also loves musicals and proudly admits she is a logophile. 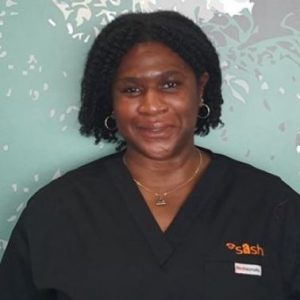