Dr Tristram Bennett graduated as a veterinarian from Massey University, New Zealand in 2010 with Distinction and recognition as a Massey Scholar. Following graduation, he worked in a large companion animal practice in Adelaide as well as working closely with wildlife rehabilitation organisations. Tristram then undertook a surgical internship at the Brisbane Veterinary Specialist Centre (BVSC) in 2013 during which he attained Membership of the Australian and New Zealand College of Veterinary Scientists in Small Animal Surgery. Upon completion of his internship he was accepted into a surgical residency training programme at BVSC which he completed in 2017.

During his residency training he spent time with SASH and was inspired by their ethos and collaboration and was excited to join the SASH team on completion of his training programme. Tristram enjoys all areas of surgical practice but has a particularly strong interest in surgical oncology and trauma surgery.

Tristram and his wife live with a Jack Russell called Hippo and a cat called Doris. His interests outside of work include running, music and a passion for motorcycles. 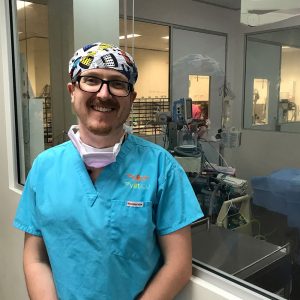