Dr Bing Yun Zhu graduated from the University of Sydney with first class honours. During her vet school summer vacation, she was selected as one of 24 veterinary students chosen from around the world to participate in Cornell University’s prestigious Veterinary Leadership Program. After graduation, Bing worked for 1 month in general practice in Canberra, ACT.

Having always wanted to specialise in small animal internal medicine, Bing accepted an offer from the University of Sydney to work as a registrar at the Camden Veterinary Teaching Hospital for 1 year. She then participated in a rotating internship at the University of Sydney in early 2011. Between 2011 and 2014, Bing undertook a residency (specialty training) in small animal internal medicine at the University of California, Davis, where she was received the Lagniappe Smith Award for Clinical Excellence and Teaching. This is an award given to one out of all residents in the hospital for performance in the hospital and dedication to patient care and student teaching.

Bing’s residency research was directed at bronchoscopy (video scoping of the airways) for chronically coughing dogs and cats. Other than airway disease, Bing’s key interests include acute or chronic kidney disease, proteinuria and minimally invasive procedures.

Bing has given hope to many dogs and cats coming to SASH with kidney failure and has implemented her expertise in feline and canine ureteral obstructions (a form of kidney failure), training our surgeons to perform new life saving techniques on these kidney stone obstructions. Bing’s residency was undertaken at UC Davis, one of the founding haemodialysis/nephrology units in the world. In 2018, Bing became certified by the UC Davis Hemodialysis Academy and is working to bring extracorporeal blood therapies to our Australian pets for toxin/drug removals, immune-mediated diseases and of course kidney failure.

Bing and her husband live in Sydney with Sienna (red and white Border Collie) and Sahara (red and white Border Collie who came to SASH with a congenital heart condition). Her hobbies include indoor rock climbing, photography, music (piano and singing), martial arts, graphite sketching and Asian pop culture. Bing believes that our pets are all members of our families and deserve just as good care as ourselves – whether that be standard of medicine or even just cuddles and compassion in the hospital environment. 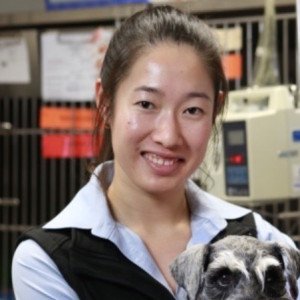